The Passport: A Harrowing Start to Summer Vacation

His alarmed face made my blood pool in my feet before he finished the sentence, “Your Passport is expired!”

“What!” I half screamed, grabbing the passport, “what does that mean!?”

Our bags had been packed for 1.7 days and the dog sitter was on her way. The grapes were sitting freshly washed in their ziplock baggy, waiting to be a morning snack when we reached the other side of the world. My mind raced to at least a dozen different ways I had ruined the trip we’d dreamed of for years.

We both grabbed our laptops and started typing frantically, searching for answers under the ticking time bomb of a flight to Paris in less than 4 hrs.

What ensued next turned out to be some of the biggest life lessons I have received. Here’s what I gleaned from my moments of crisis:

1. When you feel less worthy of kindness than a pool of brown stuff on the sidewalk, do the most counterintuitive thing possible: ASK FOR KINDNESS. As Rob put his fingers through his thick black hair and scowled at the computer, he became highly unresponsive. I looked at him and blurted out, “Rob, look at me!” Tears welled in my eyes,“I am feeling like the biggest f***-up in the world, I really need you not to cut me out right now.” I could see his expression soften and he reached for my hand. Yes, saying that out loud was one of the hardest things I have ever said but I’m so very glad I trusted that he would still love me even though I had made a HUGE mistake

2. Adulting is hard, and life is complicated but luckily OTHER PEOPLE STRUGGLE TOO. As Rob continued to frantically scan google for a remedy to our situation, I reach out for help and called a dear friend of mine who is an avid traveler and attorney. I asked him not to laugh at me and told him the situation. His response was perfect,“Call the airline, you can’t be the only one who has made this mistake.” He helped me feel less alone in my struggle and actually directed me toward the solution.

3. PERSPECTIVE IS A GAME CHANGER. In 12 years I have never felt so grateful for my partner. Relationships, whether romantic or platonic are an incredible amount of work. Relationships are filled with ups and some extreme downs. How those moments of panic are handled says everything about your connection. I have done my fair share of complaining about Robert throughout the years. We have our differences, but in the end, when I was berating myself and saying how I had turned out just like my dysfunctional mother, I was so grateful for his compassionate response. He gently told me that it was a simple mistake and that we would work it out. He held me in his arms while I cried. Just like that, my love for him was renewed in a profound way.

In summary, be compassionate towards yourself and ask for kindness, know that you’re not alone and ask for help. Value and see the kindness in others rather than sweating the small stuff. 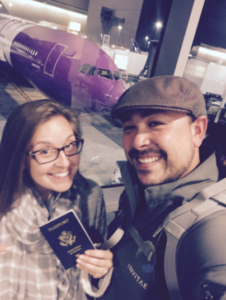 All’s well that ends with a trip to Paris

So what happened with our trip? We wound up delaying the trip by 3 days while we wait for my passport.There’s a protocol for situations just like mine! It turns out I really wasn’t alone, and everyone was super kind to me as they helped me make it to Paris. I have a renewed sense of love and respect for my partner and that was well worth 3 fewer days in Europe and a passport rush fee. The whole experience has become a rainbow in the storm clouds.